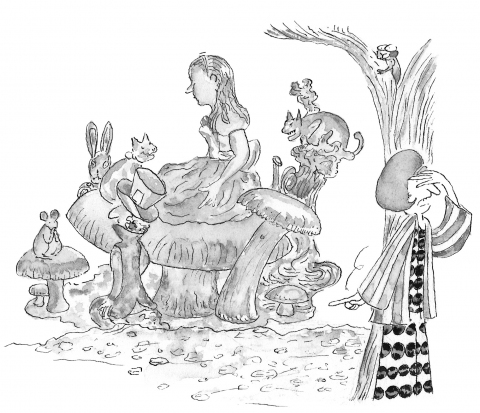 “There is no downside to a book like After the Fall and a rara avis it is.”

There is such a classic E. B. White-ishness to the fully illustrated, whimsical After the Fall that the reader expects a mouse in a very small roadster to come driving through Central Park at any moment.

The fact that White and Fall’s author, cartoonist Victoria Roberts share the literary sensibility of The New Yorker and a love of the mythical New York City as a place in which no hope rings false of course enhances these feelings of similarity on the part of the reader. Nonetheless, it is safe to say that no other cast of characters this season would be better able to take a place on Manhattan bookshelves alongside Stuart Little and Eloise and Archy & Mehitabel than Pops and Mother and Gudelia the maid and Tom Drawbridge and Olive and Phoebe and Sancho, the pet pugs—and all the other characters in After the Fall.

Admittedly, the title sounds more like Arthur Miller than E. B. White, but from Ms. Roberts’s cover illustration of our bulbous-nosed, bespectacled dramatis personae onward, the thing is a pure, sophisticated, wry pleasure.

Victoria Roberts, of course, has been creating cartoons for The New Yorker since 1988, and her illustrations have appeared in the New York Times, the Washington Post, and TIME magazine as well, making her work instantly recognizable and often eliciting a Pavlovian response of unmitigated laughter.

Ms. Roberts infuses her “illustrated novel” (the word to drawing ratio is approximately 50/50) with the same dry humor she brings to her cartoons.

Mother and Pops—he is an eccentric inventor, she an eccentric socialite from Buenos Aires—are broke, giving rise to such controversy as this:

“’Pops won’t sell the Olmec head!’ My little sister, Alexandra, greeted me at the door when I arrived home from the Lycee. So did our three pugs.

The exchange is, of course, accompanied by a ducky drawing of the gigantic stone head and Sis and one of the pugs—Phoebe, from the looks of her.

And the drawings, of course, are half the fun.

The whole affair is, after all, sort of a picture book for adults, one in which much joy is derived by ignoring the words in order to drink in the drawings.

The family is ruined in the way that only Manhattan families in stories like this can be ruined. They fall asleep one night in their sumptuous Olmec-infested apartment and awaken the next morning in Central Park—not quite homeless, more like “re-homed” out in the open:

“Everything was in its usual place, only out-of-doors, with trees growing in the middle of what now was the living room, dining room, and other rooms.

From there, as they say, “highjinks ensue.”

Sis, working with what the park supplies, begins to train squirrels, first for theatrical presentations and later as a part of the Lux-de-Lux Show, which goes live at five-thirty in the evening.

Mother sits in the sandbox next to the ladies bathroom and calls it Acapulco. She sips a margarita and reads the September issue of Vogue. The live-in maid now lives out, but keeps on working.

Pop frets a bit, gains a good bit of weight and attempts to put things right.

And Monsieur Marcel, maître d’ at Le Chateau Boheme drops by nightly with dinner and a bottle of Bordeaux (the cause of Pops’ weight gain).

Spirits, at first, are high, but as winter approaches, the family scatters. Mother disappears. Food gets scarce. The children leave the park to scout for better things.

And one night, bundled against the cold, they come upon a party at the Met:

“Through the large floor-to-ceiling windows we could see the Temple of Dendur, all lit up. There was a party going on, dancing at one end of the hall and dining at the other. The floral arrangements were too big. A waiter spotted us and tapped on the window, shooing us away.

Note: Sis gets the all best lines.

After the Fall is a deceptive thing. It seems, at first, such a slight thing. Perfect for enjoying in a single sitting. But dipping in the reader begins to feel the labor of love that is presented here. The accomplishment of the illustrations is a given.

But then there is also the peculiar magic of the story itself, the nonsense of it, and the placement of it as well: in the heart of the Manhattan in which Santa works in Macy’s and Jean Arthur gets hit by a falling mink coat as she rides in the open air on a double-decker, and Deborah Kerr makes the mistake of looking up at the Empire State Building as she gets out of that cab—the Manhattan that functions on this promise: that it always all turns out well in the end.

Words tumble out easily when writing about Victoria Roberts’s achievement in After the Fall, words like delightful and satisfying, entertaining, diverting, and droll. Even fab comes to mind if one wishes to match the adjective to one of Mother’s pantsuits.

There is no downside to a book like After the Fall and a rara avis it is. The investments, reading time, cash outlay, and such, are slight. And the rewards more than compensate.
Vinton Rafe McCabe
NEW YORK JOURNAL OF BOOKS